The first part of the finals was held in the fourth day of boxing at the 69th edition of the Bornemissza Youth & Junior Memorial Tournament in Eger, Hungary. Japan and India both nations claimed two gold medals in the junior finals keeping Asia’s flag high in the event. The upcoming fifth and last competition could be more successful for the Asian boxers.
Kazakhstan competed with superb success in the last edition of the Bornemissza Youth & Junior Memorial Tournament and their boxers returned to the traditional competition. India, Japan, Mongolia and Thailand also joined to the event this year which made the Bornemissza Youth & Junior Memorial Tournament even stronger than ever. The competition is holding in the historical city of Eger which is located near to the Hungarian capital and nearly 300 boxers from 22 nations are attending in the tournament.

Yuna Nishinaka won the Japanese final at the girl’s light flyweight (48kg) in Eger
Japan sent their junior national team at the very first time this year out of the country to raise their international experiences before the ASBC Asian Confederation Junior Boxing Championships. Their junior girl 15-year-old Yuna Nishinaka attended only in national events before the Bornemissza Youth & Junior Memorial Tournament but her first international competition was a big success. Nishinaka eliminated Hungary’s EUBC European Confederation Junior Boxing Championships bronze medallist Laura Kovacs in the semi-final of the light flyweight (48kg) in Day3. Nishinaka met for the gold medal with her teammate Himari Moriwaki who was slightly better than Hungary’s Lilla Szeleczki in another semi-final. Nishinaka controlled their exciting final mainly in the second part of the bout claiming a gold medal for Japan in Eger.

Japan’s second gold medal was achieved by Daiya Kira in Eger
Besides to the Japanese girls their male juniors also attended in the Bornemissza Memorial Tournament in Eger. Several of their team members claimed bronze medal in this age group during the event but their lone male junior finalist captured the gold in Hungary. Daiya Kira won several Japanese national events and meetings but he impressed in the international event in Eger as well. Japan’s new junior sensation controlled all of the rounds against Denmark’s Masti Waysi in the final of the flyweight (50kg) and secured his career highlight with this important gold medal.

Two talented Indian junior boxers won titles in the Bornemissza Memorial Tournament
India sent their top male junior boxers to the Bornemissza Memorial Tournament and seven of them advanced to the finals of the strong competition. Soibam Yaiphaba Singh (46kg), Navraj Chauhan (52kg), Yaiphaba Meitei Sanjaramba (54kg), Rabichandra Singh Laishan (57kg) and Vanshaj (60kg) achieved silver medals in the event following their losses to tough US and Hungarian opponents.
India’s first gold medal in the Bornemissza Tournament was achieved by Abhimanyu Loura who eliminated United States’ Carl Garrison in the semi-finals and continued his winning path against Hungary’s Krisztian Palyi at the light heavyweight (80kg). Vishal Gupta was the second gold medallist in Eger who defeated Croatia’s Jura Kunic in the final of the heavyweight (+80kg). 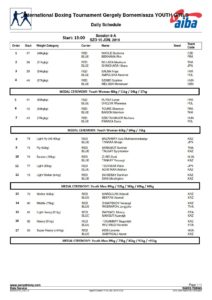