Iran, Syria, Turkmenistan and Vietnam joined to the semi-finals increasing the number of medallist nation up to 18 in Bangkok 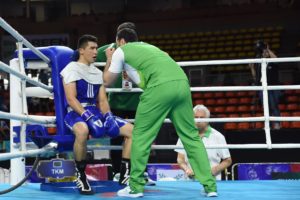 Mongolia’s Erdenebat Tsendbaatar overwhelmed his rival and he is a guaranteed medallist in Bangkok
The first victory of the fifth competition day in the ASBC Asian Confederation Boxing Championships was captured by Mongolia’s defending Asian Games winner Erdenebat Tsendbaatar at the men’s lightweight (60kg). The Mongolian star spent less than two minutes in the ring when his opponent’s ringside abandoned their unequal contest. Tsendbaatar knocked down Jordan’s Ahmad Al-Matbouli twice in the first round and their Ukrainian head coach Mr. Andriy Proskurnin abandoned their fight to save his boxer’s health.

Thapa and Rahimov advanced to the semi-finals in the strong men’s lightweight (60kg)
India’s Shiva Thapa was gold medallist in a previous edition and the two-time Olympian returned in top form. The 26-year-old Indian lightweight (60kg) boxer tried to land more punches than his opponent from Thailand, Rujakran Juntrong. The Asian Games bronze medallist Thai boxer was more than competitive for Thapa but the experienced Indian had answers to all of his combinations. Following Thapa’s success Uzbekistan’s Shukurjon Rahimov had to do over his limits to eliminated Turkmenistan’s best boxer Feliks Stamm Memorial Tournament winner Hursand Imankuliyev.

Madrimov lost his quarter-final to Kazakhstan’s Kulakhmet
Uzbekistan’s Asian Games winner and ASBC Asian Champion Israil Madrimov had tough battles against his main Kazakh opponent Abilkhan Amankul in the recent two years. Amankul is still not enough shape after his injury therefore their head coach Mr. Galymbek Kenzhebayev decided to take Bocskai Memorial Tournament winner Tursynbai Kulakhmet to Bangkok. The Kazakh middleweight (75kg) boxer proved strong performance in the first round and took the lead in each scorecard. Madrimov was not enough shape today and Kulakhmet defeated the main favourite of the category in Bangkok.

Turkmenistan’s lone medal was achieved by Nursahat Pazzyyev
Turkmenistan’s best hope Hursand Imankuliyev lost his quarter-final at the men’s lightweight (60kg) today but his teammate Nursahat Pazzyyev claimed at least a bronze medal and made their country proud. Pazzyyev, who is coming from a strong boxing family, was bronze medallist in the Singapore 2010 Youth Olympic Games and qualified for the London 2012 Olympic Games. After four years of break Pazzyyev returned to the world of boxing in 2017 and he reached his peak performance in the ASBC Asian Confederation Boxing Championships. He had a tough rival Syria’s Ahmad Ghossoun, who claimed bronze in the 2015 edition, but Pazzyyev’s jabs decided their contest.

Jordan’s second guaranteed medal in Bangkok was taken by Hussein Iashaish
Hussein Iashaish joined to the international stage in 2012 when he attended in the AIBA Youth World Boxing Championships. He moved ahead step by step and qualified also for the Rio 2016 Olympic Games where he reached the Top8. Iashaish moved down to the heavyweight (91kg) and his style was uncomfortable for India’s Naman Tanwar today. Jordan’s pride was never stopped attacking and his pressurizing tactic delivered for him a place in the semi-finals.

Strong contests in the quarter-finals of the women’s bantamweight (54kg)
Mongolia’s AIBA Women’s World Boxing Championships bronze medallist Nandintsetseg Myagmardulam is a key boxer at the bantamweight (54kg) who triumphed over Japan’s Saya Hamamoto in a narrow fight. Chinese Taipei’s Huang Hsiao Wen impressed in the quarter-final against Thailand’s Jeerapak Inkam and used her longer hands to keep the best fighting distance. China’s Shi Qian was slightly better than Kazakhstan’s Astana 2016 AIBA Women’s World Champion Dina Zholaman which was another key contest in the category.

Uzbekistan’s Baturov eliminated his main rival already in the quarter-finals
Uzbekistan’s Bobo-Usmon Baturov and Kazakhstan’s Aslanbek Shymbergenov met in the final of the Jakarta 2018 Asian Games last August. Baturov won that fight but in Bangkok the two favourites had to meet already in the quarter-finals. The Uzbek and the Kazakh boxer both started the bout in amazing rhythm in Thailand’s capital. Shymbergenov used his counter-attacking style more times but Baturov was a hard target for him. Both boxers injured in the second round but the contest was won by the Uzbek Asian Games winner.

Favourites of the super heavyweight (+91kg) marched into the semi-finals
Uzbekistan’s Bakhodir Jalolov is the defending ASBC Asian Champion who returned to the national team from the professional world. The 200cm tall Uzbek boxer controlled all of the rounds against China’s Mu Haipeng and advanced to the semi-finals in Bangkok. Another gold medal contender Kazakhstan’s AIBA World Boxing Championships silver medallist Kamshybek Kunkabayev also did not give any chance to Jordan’s Odai Riad Al-Hindawi. Syria’s two-time bronze medallist from the previous editions Mohamed Moulayes and India’s Satish Kumar also advanced to the semi-finals in Bangkok.

Winners of the recent big events at the women’s flyweight (51kg) all advanced to the semi-finals
Vietnam’s Nguyen Thi Tam is the reigning ASBC Asian Women’s Champion at the women’s flyweight (51kg) an following her tight success in the preliminaries she has done better performance in the quarter-final against Mongolia’s Lutsaikhan Altantsetseg. DPR Korea’s Pang Chol Mi is the AIBA Women’s World Champion in this category who dominated her bout against Chinese Taipei’s Chin Chian Huei. The third favourite of the category China’s Chang Yuan won the Asian Games last August and she was slightly quicker than Thailand’s Chuthamat Raksat on Day5.