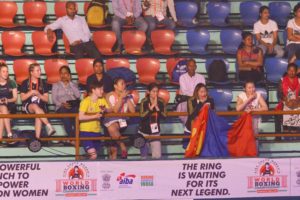 The second competition day was held with 30 preliminary bouts in the Guwahati 2017 AIBA Women’s Youth World Boxing Championships today. Five Asian women talents won their contests in the first day of the competition and further eight of our hopefuls advanced to the next stage of the championships on Day2.
The total number of the boxers is 160 from 31 nations and among them 67 Asian competitors will be attending for the medals in Guwahati from 14 countries from our continent. China, Chinese Taipei, India, Japan, Kazakhstan, South Korea, Mongolia, Nepal, Philippines, Sri Lanka, Thailand, Tajikistan, Uzbekistan and Vietnam are the participating Asian nations in Guwahati.

Light flyweight (48kg):
China’s three-time National Champion in various age groups Nie Yuan arrived to Guwahati as one of the gold medal contender of the light flyweight (48kg). The 18-year-old Chinese boxer, who trains in the city of Hebei, controlled all of the rounds against Scotland’s Billie Denholm and finally her hand was raised after the last gong. Nie Yuan’s next opponent will be Mongolia’s Mungunsaran Balsan who is also a top boxer in the Asian continent.

Featherweight (57kg):
Mongolia’s best youth boxer Namuun Monkhor is unbeaten in the national events in the recent years but she had to do her very best to eliminate France’s Victoire Piteau in Guwahati. Her European opponent had the longer reach but Monkhor was aggressive and tried to pressurize Piteau from the second round. The 18-year-old Mongolian No.1, who is a secret favourite in Guwahati, turned back the fight and advanced to the last 16 in the global event.
India’s Balkan Women’s Youth Tournament winner Shashi Chopra began her campaign in Guwahati where she is gold medal contender of her respective weight class. The 18-year-old Hisar-based boxer was nervous in the first round against Uzbekistan’s two-time Youth National Champion Durdonakhon Rakhmatova but from the second she proved her best and joined to the last 16 of the competition.

Lightweight (60kg):
India’s Golden Gloves of Vojvodina Women’s Youth Tournament winner Vanlalhariatpuii arrived from Mizoram to Guwahati and she was hungry for a success against South Korea’s Im Ae Ji. The 18-year-old Korean talent, who won five national events in the recent two years, started aggressively and launched big punches in the first round. Im pressurized the Indian talent in all of the three rounds well enough and defeated the first boxer from the host nation’s squad in Guwahati.
Kazakhstan’s Zhansaya Baltabekova began boxing in 2011 and following her title in the Slovakian Women’s Cup she is hoping to get a medal in Guwahati. The Kazakh boxer started well against Japan’s Seira Hamaguchi who achieved five national titles in the recent two years. Baltabekova felt the rhythm well enough and she proved better performance today than her tough Japanese opponent in Guwahati.

Welterweight (69kg):
China’s 18-year-old Wu Shuang claimed bronze medal in their 2015 Women’s Junior National Championships but since then she was unstoppable in their national events. The Chinese boxer launched single jabs to stop Mongolia’s Anu Namjim in the first round of their last 16 bout. The Mongolia boxer moved forward more actively from the second round but the Chinese counter-attacks were accurate in their today’s contest.
India’s Astha Pahwa was silver medallist in the Golden Gloves of Vojvodina Women’s Youth Tournament in August and she also opened her participation in Guwahati. The 17-year-old boxer, who trains in Saharanpur, met with Bulgaria’s Melis Yonuzova and she had several good shots in the first round. Pahwa received advices from her coach Raffaele Bergamasco of Italy but Yonuzova also launched strong punches in the second round. The Indian boxer had great stamina in the final round and she was able to win her first difficult bout.

Middleweight (75kg):
Chinese Taipei’s four-time National Champion Yang Ya Chu had a few difficulties in the first minute against Ireland’s EUBC European Confederation Women’s Youth Boxing Championships bronze medallist Lauren Kelly but she was able to find her best rhythm still in time. Yang, who has got already 40 contests during her career, looked energetic and her punches were stronger than her Irish opponent’s shots therefore Chinese Taipei’s 18-year-old pride advanced to the quarter-finals.

Serik Konakbayev: We could create the united sport spirit of the Asian boxing