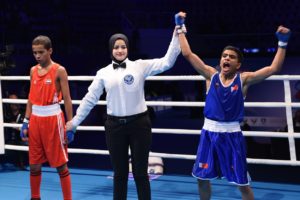 India’s Bishwamitra Chongtham won his second fight within two days
India’s Bishwamitra Chongtham arrived to Fujairah as one of the favourites at the light flyweight (48kg) who eliminated Iraq’s Mohamed Baqer Radhi Al-Shuwaili on Day1 of the ASBC Asian Junior Boxing Championships by large margin of differences. His second opponent in the last 16 was Tajikistan’s Iskandarbek Rustamov who claimed medals in strong international tournaments in Kazakhstan. The Tajik boxer started the first round with a nice jab but Chongtham also replied to him with tough hooks. The Indian found his best tempo very quickly and eliminated one of the best Tajik boxers in Fujairah.

Kazakhstan’s first success in Fujairah was earned by Bekzat Aldamzharov
Kazakhstan’s Bekzat Aldamzharov won the Makanalin & Nokerbekov & Satenov Junior Memorial Tournament in Balkhash this June and following that win, he was selected to attend in Fujairah. The Aktau-based Aldamzharov had to meet with Kyrgyzstan’s Kudretbek Suleimenov which bout was expected to be a top one on Day2. The 16-year-old Kazakh overcame the Kyrgyz boxer in the attacks and controlled the first round. Aldamzharov continued his strong performance against his neighbouring rival and advanced to the last eight at the light flyweight (48kg).

Tajikistan’s 14-year-old Abubakr Murodov won two contests within two days
Tajikistan’s youngest team member is Abubakr Murodov who will be turning to 15 only in the end of the year but he impressed in the first two days in Fujairah. The Kulob-based Tajik boxer eliminated Kyrgyzstan’s Adilet Omurov on Day1 and showed confident performance in the second day against South Korea’s Kim Jun Ho. Murodov moved closer to his Korean opponent already in the first round and his tough hooks worked well from that range. The one of the youngest boxers of the whole championship won his second fight within less than 24 hours in Fujairah.

Afghanistan has done its impressive debut on Day2
Afghanistan’s Mohammad Omid Kohistani has been added to the junior national team only in the final stage of the preparation for Fujairah. The young Afghan started his campaign strongly and his effective attacks paid off quickly in his opening bout against United Arab Emirates’ Nawwaf Ali Al-Zahmi. The Afghan boxer’s tough punches decided their contest very quickly and the referee stopped the unequal bout in the first round which means the developing country continued its strong performance after the ASBC Asian Schoolboys Boxing Championships.

Iran won the last bout of the afternoon session in both rings
The Iranians amazed in the last bout of the afternoon session of the second competition day in Fujairah, both of their young hopes opened in style. Iran’s featherweight (57kg) Abolfazl Faridi maintained the best fighting range quickly against United Arab Emirates’ Eisa Al-Kurdi and in the second he decided their contest stopping his opponent. Iran’s Seyed Ali Hasheminasab is only 15 and moved up one category to attend in Fujairah which decision paid off in the event where he started with a success over South Korea’s Kang Tae Young.

Bahrain’s historical success in the second day of boxing at the pinweight (46kg)
Bahrain sent finally one boxer to the ASBC Asian Junior Boxing Championships but their new national team member won his opening fight making the country proud. Sayed Fadhel Abbas Abdulla had only one international contest before the start of the Fujairah event but he had a strong strategy against United Arab Emirates’ Salem Ahmed Al-Husain. Tony Davis’ pupil had height disadvantage in the bout but his aggressive attacks and effective jabs paid off which delivered Bahrain’s first ever success in the history of the ASBC Asian Boxing Championships.

Tajikistan’s Firdavs Rustamov surprisingly lost his opening bout to his opponent from Chinese Taipei
Tajikistan’s Firdavs Rustamov claimed bronze medal in the Suleimenov Prizes Junior Tournament one year ago when he was only 14. The Tajik pinweight (46kg) boxer was the favourite against Chinese Taipei’s Hsu Po Hao but his opponent showed better skills than expected. Rustamov increased his tempo in the next period and the referee counted the Chinese Taipei boxer in the second round following his tough shots. Hsu returned to the match in the third once again and his efforts were enough to turn back their fight which was one of the main surprises of Day2.

Kazakhstan’s Abdulla Patiyev and his teammates controlled their fights on Day2
Kazakhstan’s Abdulla Patiyev won four tournaments in the recent one and half year but he had to meet with a strong boxer as first at the flyweight (50kg), Bahovaddin Soliev of Tajikistan. The Kazakh boxer had to do his very best to eliminate the promising Tajik who competed international tournaments in Kazakhstan this year. Kazakhstan’s best performance in the second competition day was delivered by Nursultan Altynbek who overwhelmed Kyrgyzstan’s Ikhtiyar Nishonov technically in their bantamweight (54kg) bout. Kazakhstan’s Yerassyl Yermek is a super talented featherweight (57kg) boxer who is only 15 but he controlled his fight over Chinese Taipei’s Chang Jen I.

Thailand’s Phanuwat Butchan dominated his opening fight in Fujairah
Thailand’s best junior male boxer is Phanuwat Butchan who won their Youth National Games and the Khon Kaen Junior National Games this year. The 15-year-old Thai boxer is attending in his first ever international tournament but he started confidently against Kuwait’s Huzaifah Al-Hulaili. The Thai lightweight (60kg) boxer was patient in the bout, he was waiting for the best angles when he landed effective punches. Butchan played with his Kuwaiti opponent in the third round and enjoyed the final part when he celebrated also the success.