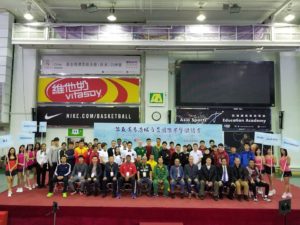 An international competition, the fifth edition of the Hong Kong City Box Cup was held for the female and male boxers in Hong Kong. Chinese Taipei’s Tu Po Wei is a medal favourite in the upcoming ASBC Asian Confederation Boxing Championships and he proved strong performance with his gold medal in the Hong Kong City Box Cup.
The competition is a relatively new event in the Asian boxing calendar but supports the region’s athletes to meet each other. Hong Kong Boxing Association gave chance for the region’s best boxers to raise their experiences in the competition. This event was hosting by the Hong Kong Boxing Association and it was held only the fifth time after launching the competition four years ago in 2015.
Host of the competition Hong Kong could not get any gold medals on home soil in 2016 but it was a good start for their hopes. Hong Kong’s top athletes worked much better in 2017 and achieved two titles in the competition. In 2018 their boxers won two gold medals in the Hong Kong City Box Cup which they repeated in the new 5th edition as well in the novice level.
The competition saw two novice finals first and Hong Kong’s Taqdeer Singh claimed the gold medal at the light welterweight (64kg). Hong Kong was able to keep the gold medal at home in the second final when Chan Ka Wa had to face with Macau’s Cheong Ka Chon at the welterweight (69kg).
China’s Guangzhou team impressed in the women’s part of the Hong Kong City Cup Box and their No.1 Pan Sumei was too strong for Singapore’s Danisha Mathialagan at the flyweight (51kg). The second Chinese lady Zhao Tiantian controlled her bantamweight (54kg) final against Hong Kong’s Chan Pui Sze and won the title of the international event.
Chinese Taipei’s FISU University World Boxing Championships silver medallist Tu Po Wei was the biggest name in the Hong Kong City Box Cup. He claimed only silver in the last 2018 edition therefore he was hungry for a success in the final of the flyweight (52kg) which he solved against Hong Kong’s Chan Wai Chun.
China’s first male gold medal was achieved by Shao Zibin at the bantamweight (56kg) who worked well in the final against Singapore’s Muhammad Hafiz Bin Ahmad. His teammate Gao Song had to face also with a young boxer from Singapore Velvan Tan Jun Jie in the final of the Hong Kong City Box Cup. The Chinese welterweight (69kg) boxer used up all of his experiences to beat the Singaporean teenager in the final.
Australia sent also a team to the 5th edition of the Hong Kong City Box Cup and two of their boxers achieved gold medals in the event. Zac Lovekin has got international experiences and he is well-known at the lightweight (60kg). His current skills were too strong for Singapore’s Abdul Jalil Danial and their bout finished before the final gong. Australia’s new middleweight (75kg) talent Benjamin Hussain was also better than China’s Yao Jiangjiang which delivered another success for the Aussie team.


List of the winners in the Hong Kong City Box Cup