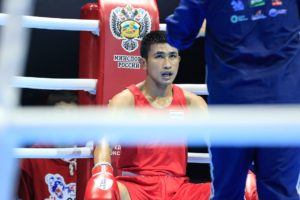 The third day of competition was held at the AIBA World Boxing Championships for the men’s elite in Yekaterinburg, Russia where boxers at the bantamweight (57kg) fought for their places to the last 32. Six top Asians won their contests on Day3 and among them Thailand’s Chatchai Decha Butdee and Philippines’ Ian Clark Bautista proved their high potential in Russia.
The Asian teams prepared strongly to the Yekaterinburg 2019 World Boxing Championships in the recent months after the Bangkok ASBC Asian Boxing Championships and our continent has got several medal and title favourites in Russia. Kazakhstan, Uzbekistan, India, China, Thailand, Philippines, Mongolia, Tajikistan, Jordan, South Korea, Kyrgyzstan and many other teams from our continent have got world class boxers.
Altogether 107 Asian elite male boxers are attending in the event from 21 nations: Afghanistan, China, India, Indonesia, Iran, Iraq, Japan, Jordan, Kazakhstan, South Korea, Kyrgyzstan, Mongolia, Philippines, Palestine, Qatar, Saudi Arabia, Tajikistan, Thailand, Turkmenistan, Chinese Taipei and Uzbekistan.
Jordan’s Mohammed Abdelaziz Al-Wadi was bronze medallist already in the ASBC Asian Boxing Championships in 2011 when his first opponent Croatia’s Ramon Ferati did not start his career yet. Jordan’s most experienced boxer started the bout in different rhythm and took the lead in all scorecards. Al-Wadi increased his tempo and dominated the next period as well against the inexperienced Croatian marching to the last 32.
Philippines’ ASBC Asian Boxing Championships bronze medallist and former ASBC Asian Youth Champion Ian Clark Bautista had a stronger European opponent Slovakia’s Viliam Tanko who moved down from the lightweight (60kg). The Slovakian was taller than Bautista but the Filipino reduced that fighting distance with aggressiveness and bowed out an experienced European rival in Yekaterinburg.
China’s Chen Zhihao received the right to attend in the Thailand Open International Boxing Tournament this July where he had some surprises. Chen worked hard in the recent two months and he has been selected to attend also in Yekaterinburg which is his first AIBA World Boxing Championships. The Chinese boxer opened in style and eliminated Japan’s Youth Olympic Games bronze medallist Subaru Murata on Day3.
South Korea’s Lee Ye Chan started his international career at the light flyweight (49kg) but he is already a boxer at the bantamweight (57kg). The 25-year-old Korean had to use all of his stamina to eliminate Israel’s Bshara Sabbar but due his great finish, he was able to beat his European rival. Kyrgyzstan’s Munarbek Seitbek Uulu was expected a tough fight against Belarus’ Nikalai Shakh but the Central Asian dominated all of the three rounds and won their bout by large margin of differences.
Thailand’s first boxer in action at the Yekaterinburg AIBA World Boxing Championships was Chatchai Decha Butdee who is member of the national team since 2005. The Thai veteran, who claimed bronze in the 2013 edition, impressed once again with his excellent technique and controlled all of the rounds against Indonesia’s Jill Mandagie advancing to the next preliminary stage.