Aye, Nelly and Nwe made the women part of the Myanmar National President’s Cup stronger 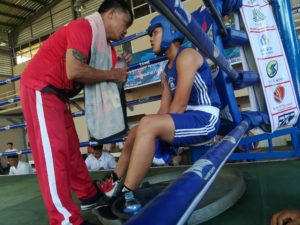 Following the 46th edition of the Myanmar State & Division Boxing Tournament the National President’s Boxing Cup was held in Yangon. Myanmar’s top women boxers such as Aye Nyein Htoo, Nelly Bawy Nei Sin, Pyae Phyo Wai and Nwe Ni Oo all impressed in the National President’s Cup.
The competition is one of most important tournaments in Myanmar and all of their best boxers attended in the National President’s Cup in Yangon. Twelve new female and male champions have been crowned in the national event and the level of the women competition was high in Yangon.
Nay Pyi Taw hosted the 2013 Southeast Asian Games where Myanmar was able to get gold medal in the boxing tournament. Myanmar attended in the Kuala Lumpur 2017 Southeast Asian Games, in the Ho Chi Minh City 2017 ASBC Asian Confederation Women’s Boxing Championships and in the Thailand Open International Boxing Tournament in Bangkok this July to raise the number of the experiences of their boxers.
The Myanmar National President’s Cup was the first selection event for their boxers to the upcoming Manila 2019 Southeast Asian Games. Women’s boxers could attend from the pinweight (45kg) up to the featherweight (57kg) and five strong champions have been crowned in Yangon.
The first winner of the women’s competition was Su Shar Nyo who won the gold medal at the Myanmar State & Division Boxing Tournament in September and she was able to achieve her next title quickly in Yangon. Aye Nyein Htoo won the title of the flyweight (51kg) at the Myanmar State & Division Boxing Tournament a few weeks ago and this time she shined at the light flyweight (48kg) after beating Mya Moe Thu in the final.
Southeast Asian Games bronze medallist Nelly Bawy Nei Sin is the most experienced woman boxer in Myanmar who began her career in 2009. The 25-year-old Mandalay-based boxer was too strong for all of her rivals including Nan Moe Oo in the final of the flyweight (51kg) and proved she is Myanmar’s best woman hope in the international stage.
Pyae Phyo Wai claimed bronze medals in the recent national events since 2016 but this time she could win her bantamweight (54kg) in Yangon following her success over Htet Htet Khaing Oo in the final. Nwe Ni Oo won the gold medal at the 2013 Southeast Asian Games and the 24-year-old talent won her next national title after beating Nwe Oo Khaing in the final of the featherweight (57kg).
The men boxers attended in nine different weight classes from the light flyweight (49kg) up to the middleweight (75kg) in Yangon. The first title was achieved by Kyaw Hla Maung who won the Myanmar State & Division Boxing Tournament in September and repeated his performance in Yangon as well beating all of his rivals at the light flyweight (49kg).
Zaw Myint Moe attended at the Thailand Open International Boxing Tournament in Bangkok this July and he used up those international experiences in the final of the flyweight (52kg) when he faced with Wai Phyo Tun. Pyae Sone also attended in Thailand’s main international competition on July and defeated his top national rival Min Khaing Kyaw Sar in the final of the bantamweight (56kg).
Thiha Zaw moved down to the lightweight (60kg) and won his second national title in 2018 beating Aung Naing Win in the final. Kyaw Min Oo (64kg), Myanmar’s best male hope Myo Kyaw Thu (69kg) and Ye Lin Tun (75kg) all have got international experiences and won their weight classes with strong performances in Yangon.