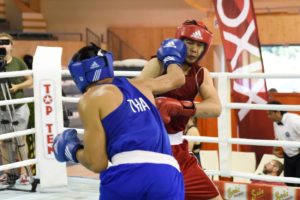 Japan’s Hikaru Shinohara caused the main surprise of Day5 and claimed gold medal
Thailand’s AIBA Women’s World Boxing Championships silver medallist Nillada Meekoon moved up to the flyweight (51kg) in the recent weeks and following her success at the Golden Girl Boxing Championships she advanced to the final of the Bornemissza Memorial Tournament. Thailand’s 17-year-old sensation had a few difficulties against Japan’s Hikaru Shinohara in the first round of their final but she stepped into the gas in the second. Following Meekoon’s strong actions the referee counted the Japanese boxer in the second but Shinohara did not give up their fight. Shinohara landed more punches in the third round and has done a big surprise in the competition defeating the Thai favourite.

Kazakhstan’s Mukhammedsabyr Bazarbay Uulu won the first male Asian final in Eger
Japan’s Shogo Tanaka claimed gold medal in the Komsomolsk-na-Amure International Youth Tournament in Russia as the start of the year and one of their best youth boxers competed also in the Bornemissza Memorial Tournament. Tanaka had to meet in the final of the event with Kazakhstan’s Mukhammedsabyr Bazarbay Uulu who had tough junior results in 2018. The Kazakh southpaw surprised his Japanese opponent with his tactic in the first round of their final. Tanaka turned up the heat in the second round but Bazarbay Uulu had quick tactical response and won their strong Asian bout.

Thailand’s Sukthet Sarawut won the men’s flyweight (52kg) in Eger
Thailand’s Sukthet Sarawut claimed silver medal in the Buenos Aires 2018 Youth Olympic Games at the flyweight (52kg) and gold in the last edition of the ASBC Asian Confederation Youth Boxing Championships. The 18-year-old Thai boxer overcame his tough Kazakh opponent Talgat Syrymbetov in the attacks and took the lead on the scorecards after one round. Sarawut and his coaching staff knew how can he handle his Kazakh opponent and his stamina was also enough to beat Syrymbetov in Eger.

Japan’s Reito Tsutsumi won the exciting lightweight (60kg) final in Eger
In the second Japan vs. Kazakhstan final two ASBC Asian Junior Champions fought for the title of the lightweight (60kg) of the Bornemissza Memorial Tournament. Japan’s Reito Tsutsumi and Kazakhstan’s Aitzhan Ashirkhan both are Asia’s top youth boxers in this division. Both athletes received warnings in the second round of their final contest which was delivered speedy exchanges from the rising stars. Tsutsumi’s final round was crucial and his last minutes meant the Japanese boxer could win his next international title.

The best final was held at the middleweight (75kg)
The most exciting final of the Bornemissza Memorial Tournament was held at the middleweight (75kg). Thailand’s defending ASBC Asian Youth Champion Weerapon Jongjoho had to meet in the final with Kazakhstan’s ASBC Asian Junior Champion Yerassyl Zhakpekov which bout was not only the most awaited one but the best as well. Zhakpekov, whose elder brother Yermakhan was ASBC Asian Youth Champion in 2018, started well but Jongjoho replied to those shots quickly. The Thai boxer felt the tempo well in the second round and dominated that period with his jabs which overcome the Kazakh boxer’s shots. Thailand’s best male youth boxer enjoyed their top contest and won the bout by unanimous decision in Eger.