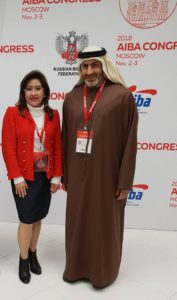 The President of the Asian Boxing Confederation and AIBA Vice-President Mr. Anas Alotaiba congratulates to Indonesia’s Ms. Shelly Selowati H. Soejono electing as Executive Committee member of the International Boxing Association. Indonesia’s lone woman boxing official was elected to one of the highest management position during the AIBA Congress which was taking place in Moscow in the recent days.
Ms. Selowati Hadi Soejono is an international official in the boxing world and all of the members of the AIBA and ASBC families are know her in her short nickname, Shelly. She is the only woman Technical Delegate in Indonesia in all sports and the first one in the country’s sport history in this high international position.
The former successful swimmer is the Secretary General in Indonesia and she worked as Competition Manager in the recent Asian Games in Jakarta where their team claimed two bronze medals, the first ones since the Bangkok 1998 Asian Games.
She was the Supervisor of the Guwahati 2017 AIBA Women’s Youth World Boxing Championships and in the Ho Chi Minh City 2017 ASBC Asian Confederation Women’s Boxing Championships, furthermore Deputy Supervisor in the Gold Coast 2018 Commonwealth Games.
Shelly was appointed as boxing official in the upcoming AIBA Women’s World Boxing Championships which will be held in New Delhi, India from November 15. Indonesia registered two talented young boxers to the AIBA Women’s World Boxing Championships.