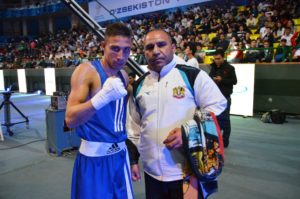 The final competition day was held in the boxing tournament of the Mediterranean Games in Tarragona, Spain where the men boxers could attend in nine different weight classes. Syria had two finalists and among them ASBC Asian Confederation Boxing Championships bronze medallist Ahmad Ghossoun won the gold medal in Tarragona. Syria finally claimed one gold medal, one silver and one bronze in the Games.
The Mediterranean Games is a multisport event which holds every four year generally but the last edition was held in Mersin, Turkey in 2013. Due the busy competition schedule the organizers of the Mediterranean Games decided to host the multisport event in 2018 and not in 2017 as the previous plan.
Syria was taking part in the event with strong team, six of their best boxers are attending in the event in spite of their crisis in the country. The Syrian boxing team worked well in the last edition of the ASBC Asian Confederation Boxing Championships in Tashkent and also in the Islamic Solidarity Games one year ago therefore their goals are high in Tarragona.
Islamic Solidarity Games winner Hussin Al-Masri (52kg), Mohamed Kherim Mousatat (64kg), veteran Abdelmouen Aziz (69kg), their star Ahmad Ghossoun (75kg), powerful Alaaldin Ghossoun (91kg) and two-time ASBC Asian Confederation Boxing Championships bronze medallist Mohamed Moulayes (+91kg) were representing Syria in the boxing tournament of the Mediterranean Games.
Syrias Hussin Al-Masri moved up to the flyweight (52kg) only in the recent weeks but in his original category he was gold medallist at the Islamic Solidarity Games and became the ASBC Discovery of the Year 2017. The Syrian talent eliminated Moroccos Yassine Bendadda in the quarter-finals and triumphed over Italys two-time Olympian Manuel Cappai in the last four. The experienced Syrian boxer had to meet in the final with Spains No.1 Gabriel Escobar but he was defeated by his European opponent which meant Al-Masri claimed silver medal in Tarragona.
Syrias ASBC Asian Confederation Boxing Championships bronze medallist Ahmad Ghossoun is only 22 but he is member of their national elite team since 2015. The Syrian boxer moved up to the middleweight (75kg) in the recent months and following his first success over Slovenias Aljaz Venko he was able to eliminate Algerias Azzouz Boudia in the quarter-final and Serbias Trifun Dasic in the semi-final stages of the Mediterranean Games. Ghossouns fourth and final opponent was Italys EUBC European Confederation Boxing Championships bronze medallist Salvatore Cavallaro and he was able to beat his opponent by split decision winning the gold medal of the Games.
Syrias third semi-finalist in the Mediterranean Games was two-time ASBC Asian Confederation Boxing Championships bronze medallist Mohamed Moulayes who had a successful quarter-final against Algerias Amar Ouarzedine. The 25-year-old Syrian super heavyweight (+91kg) boxer landed good punches against Moroccos Mohamed Firisse and he received also tough shots. Their contest was one of the closest semi-finals in Tarragona which was won by the Moroccan by 3:2 therefore Moulayes won bronze medal in the Games.